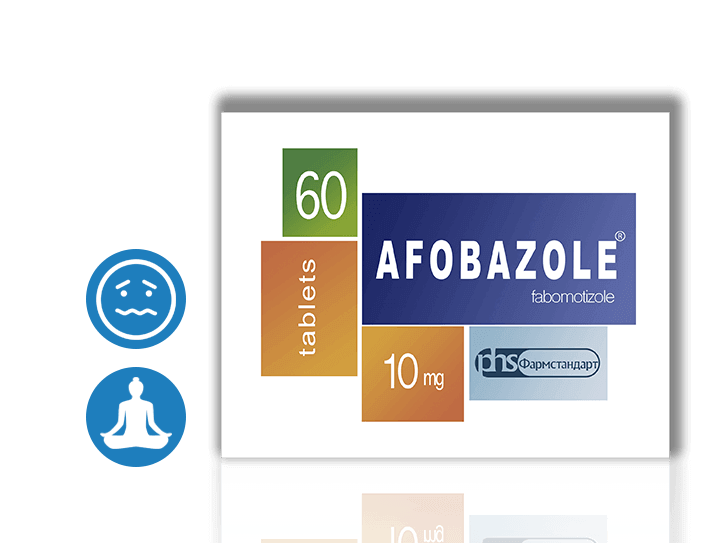 The effect of the drug is achieved mostly due to its combination of anxiolytic (anti-anxiety) and light stimulating (activating) effects. Afobazole reduces or eliminates anxious feelings (anxiety, bad forebodings and fears), irritability, tension (fearfulness, tearfulness, anxiety, inability to relax, insomnia and fear), depressive mood, somatic manifestations of anxiety (muscular, sensory, cardiovascular, respiratory and gastrointestinal symptoms), autonomic disorders (dry mouth, sweating and dizziness), cognitive disorders (difficulty concentrating and poor memory), including those arising from stress disorders (adjustment disorders). It is highly recommended to use the drug in people with mostly asthenic personality traits in the form of anxious suspicion, uncertainty, increased vulnerability and emotional lability as well as tendency to react emotionally under stress.

Metabolism: Afobazole pass firstly through the liver, the other main directions of metabolism are hydroxylation on the aromatic ring of the benzimidazole cycle and oxidation by the morpholino fragment.

Excretion: The half-life (T½) for oral administration is (0.82 ± 0.54) h. Short T½ is determined by the intensive biotransformation of the drug and rapid distribution from the blood plasma to the organs and tissues. The drug is excreted mainly in the form of metabolites and partially unchanged in urine and feces.

Hypersensitivity to the components of the drug (intolerance to galactose, lactase deficiency and glucose-galactose malabsorption), age below 18 years, pregnancy and lactation.

Afobazole should be taken orally with a small amount of water after meal. Do not dissolve or chew. The optimal dosage is 10 mg, thrice daily. Duration of the treatment course is 2-4 weeks. If necessary, the daily dosage may be increased up to 60 mg, and the duration of the course may be extended up to 3 months (on the doctor`s recommendation).

Allergic reactions; occasional headaches (go away naturally and do not require the drug discontinuation).

Significant overdose and intoxication may lead to a sedative effect and increased drowsiness without effects of muscle relaxation. In such cases the emergency help is to inject 1 ml of 20% caffeine-benzoate sodium solution subcutaneously 2-3 times per day.

Afobazole does not influence the narcotic effect of ethanol or the hypnotic effect of thiopental. The drug potentiates the anticonvulsant effect of carbamazepine and increases the anxiolytic effect of diazepam.

The use of Afobazole is contraindicated during pregnancy. If you need to take the drug during lactation, breastfeeding should be discontinued.

The drug does not negatively affect the ability to drive vehicles or to perform potentially hazardous activities which require increased attention concentration and quick psychomotor reactions.

Storage conditions: store in a dry dark place at temperatures no higher than 25°C. Keep out of reach of children.

Shelf life: 2 years. Do not use beyond the expiration date printed on the package.