Among all the antioxidants used in Russia, there is a class of substances that deserves special attention: derivatives of oxypyridines. Actually, we noticed them in one of our previous posts already, but here we would like to focus on specific products, the common things, and the differences between them. We believe that it’s gonna help you to make a proper choice!

While speaking about oxypyridines, we usually mean 3-oxypyridine, as the most frequently used substance. Derivatives of 3-oxypyridine are structural analogs of compounds of the vitamin B6 group. They are shown to have antioxidant and anti-free-radical properties, and this is very important in terms of pharmacological correction of free-radical oxidation.

In Russia, there are many medications based on 3-oxypyridine which have successfully passed clinical trials, and now they are introduced into medical practice. There are three main groups (based on the active substance):

In our store, we have two products based on oxypyridine derivatives. Let’s have a closer look! 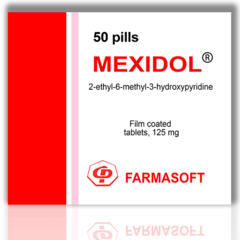 MEXIDOL ® is a preparation developed to combat oxidative stress.

It has a positive effect on cellular energy production, as it diminishes the effect of free radicals and restores the activity of antioxidant enzymes. MEXIDOL also improves the intracellular protein synthesis, helps the enzyme processes in the citric acid cycle, and facilitates glycose utilization, as well as synthesis and intracellular storage of the ATP. This can prevent pathomorphological changes in the brain caused by ischemia and hypoxia.

The drug increases the body’s resistance to oxygen deficiency. The medicine completely protects the cell membranes from various kinds of damage and harmful influences. It also has a nootropic effect: it affects higher mental functions, stimulates mental activity, and improves cognitive abilities. And also, while taking the medicine, the body’s resistance to stress increases, which in general has a positive effect on productivity.

The drug lowers the number of toxic substances in the bloodstream. Sometimes, it’s also prescribed to normalize the level of cholesterol.

All these effects are actually very similar to the ones which MEXIDOL has, except one thing: ETHOXIDOL is more potent in terms of cardiac antiarrhythmic effects. One more nice thing is that the drug is available in the form of chewable tablets with a taste of orange!

What is the Common Thing?

Both substances are of a metabolic type of action. This means that they can normalize energy metabolism in cells, regulate acid-base balance, and also control lipid peroxidation processes. The main result of this pharmacological effect is universal cytoprotection, which allows reducing damage to tissues of various organs.

Medicines have similar effects in a wide range of diseases. Both drugs are used:

What is the Difference?

That’s why MEXIDOL has a more noticeable antioxidant effect, and it also shows itself better in the treatment of ischemic heart disease. But ETHOXIDOL is a better choice for the treatment of cerebrovascular insufficiency (when it is needed to improve the bloodstream in the brain). It’s also better in case of heart arrhythmia: all thanks to malic acid.

Here is a summary:

There is one more medicine which is also a derivative of oxypyridine: Emoxypin. This preparation has a different active ingredient, methylethylpyridinol, but it also has antioxidant and antihypoxant properties. It is only available in eye drops and injection forms. Speaking of the eye drops form, the medicine has retinoprotective properties (protects the retina from the damaging effects of high-intensity light), it promotes resorption of intraocular hemorrhages and improves eye microcirculation.