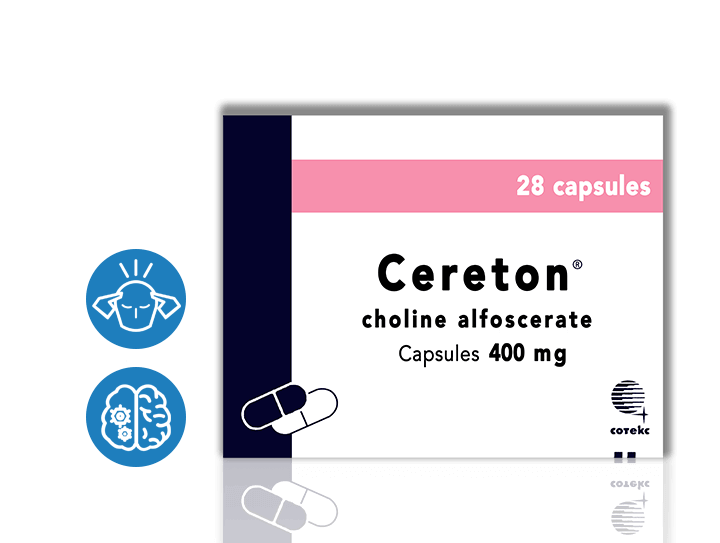 Nootropic medicine. Central cholinostimulator, which contains 40.5% of metabolically protected choline. Metabolic protection facilitates the release of choline in the brain. Provides the synthesis of acetylcholine and phosphatidylcholine in neuronal membranes, improves the blood flow and enhances metabolic processes in the central nervous system, activates the reticular formation. Increases the linear velocity of blood flow on the side of a traumatic brain injury, promotes normalization of spatiotemporal characteristics of spontaneous bioelectric activity of the brain, regression of local neurological symptoms and restoration of consciousness; has a positive effect on the cognitive and behavioural responses of patients with cerebrovascular diseases (discirculatory encephalopathy and residual effects of cerebral circulation disorders). Provides a preventive and corrective effect on the pathogenetic factors of the involutional psychoorganic syndrome, changes the phospholipid composition of neuronal membranes; participates in the synthesis of phosphotidylcholine (membrane phospholipid); improves the plasticity of neuronal membranes. Stimulates dose-dependent ejection of acetylcholine under physiological conditions, improves the synaptic transmission and receptors function. Does not affect the reproductive cycle and does not have a teratogenic, mutagenic effect.

In parenteral administration (10 mg/kg), Cereton mainly accumulates in the brain, lungs and liver. Absorption is 88%. Easily penetrates through the blood-brain barrier (in oral intake, the concentration in the brain is 45% of that in the plasma), 85% of the medicine is excreted by the lungs in the form of carbon dioxide, the rest (15%) is excreted by the kidneys and through the intestine.

Per os. In the recovery period of craniocerebral injury, an ischemic or hemorrhagic stroke Cereton is prescribed at a dose of 800 mg in the morning and 400 mg in the afternoon for 6 months.

For treating the chronic cerebrovascular insufficiency and dementia syndromes, the dose is 400 mg (1 caps.) 3 times a day, preferably after meals, for 3-6 months.

Nausea is possible (mainly because of dopaminergic activation). Cancellation of the treatment is not required; the dosage should be reduced. Allergic reactions are possible.

No significant interaction with other medicines has been identified.

Cereton does not affect the speed of psychomotor reactions.

Storage conditions: at a temperature of no higher than 25°C. Keep out of the reach of children.

Shelf life: 3 years. Do not use beyond the expiration date printed on the package.