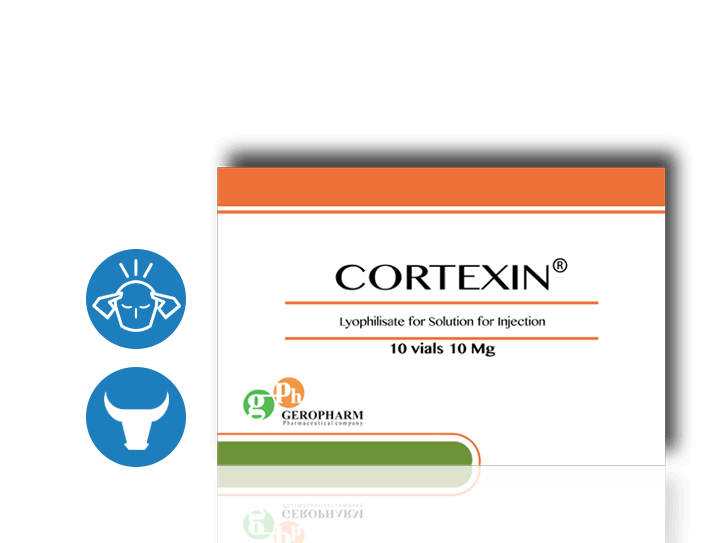 Cortexin improves brain metabolism. The drug is a lyophilisate obtained by acetic acid extraction from the cerebral cortex of cattle or pigs. It contains low-molecular active neuropeptides (molecular weight does not exceed 10,000 daltons) which penetrate easily the blood-brain barrier and directly affect nervous cells.

Cortexin has a positive effect in the violation of cognitive functions. It improves concentration of attention, short-term memory, learning ability, accelerates recovery of brain functions after stress and regulates serotonin and dopamine levels. Cortexin stimulates mental activity (no excessive activating influence) and reparative processes in the brain as well as restores the cerebral bioelectrical activity.

Complexity of the drug`s composition does not allow for the conducting of the usual pharmacokinetic analysis of individual components, since the Cortexin active substance consists of a complex of polypeptide fractions.

Before injection dissolve the content of vial in 1–2 ml of 0.5% procaine (novocaine) solution, water for injection or 0.9% sodium chloride solution. Direct the needle to the wall of the vial to avoid foaming. Injected once daily: for children weighing less than 20 kg – 0.5 mg/kg, for children over 20 kg and adults – 10 mg per day, Duration of the treatment course is 10 days. If necessary, the course is repeated after 3-6 months.

No side effects are detected.

Possible individual hypersensitivity to the components of the drug.

Overdose: No cases of drug overdose have been reported.

Interaction with other drugs: No data.

Consult with your doctor before use.

Do not store / use after storage the dissolved preparation. It is not recommended to mix Cortexin with other solutions.

In case you have missed an injection, it is not recommended to administer a double dose, just carry out the next injection as usual on the target day.

Pregnancy and lactation: The drug is contraindicated during pregnancy due to the lack of data from clinical studies. If it is necessary to prescribe the drug during lactation, breastfeeding should be discontinued.

Storage conditions: Store in a dry dark place at temperatures of 2° to 20° C. Keep in a safe place out of reach of children.

Shelf life: 3 years. Do not use beyond the expiration date printed on the package.