Interferon alfa-2b is an antiviral drug that is manufactured under a variety of brand names and is part of a number of combination medicines. Interferon alfa-2b is available for both local and systemic use. As for the methods of use, it is necessary to note that the “delivery” of the drug dose without causing negative consequences is of vital importance. The most common forms of medication are: 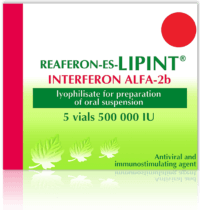 Reaferon-EС-Lipint® is a liposome form of interferon. This means that interferon molecules are placed in small bioparticles called liposomes. This biocontainer protects interferon from destruction in the aggressive environment of the stomach and allows it to circulate in the blood and maintain its activity for a longer period of time. 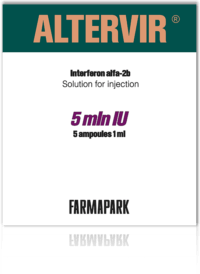 Altevir® is one more solution for taking interferon alfa-2b in order to get an antiviral effect. The most effective way to administer interferons is said to be parenteral (intramuscular injections) because in this case, the substance does not penetrate into the digestive tract, which can destroy the protein structure of interferon. In this mode of administration, the drug has the maximum effect and is almost completely absorbed by the body.

Given the long-term use of the drug, many patients learn how to make injections themselves. However, it is important to determine the correct dose of the active substance. The prepared solution must be used immediately, its storage is not recommended.

Viferon® is a complex antiviral immunomodulating drug, containing human recombinant interferon alfa-2b, as well as additional substances: vitamins E and C. Viferon® was developed in the 1990s at the Gamaleya Research Institute of Epidemiology and Microbiology by a group of scientists led by prof. Malinovskaya. In 1998, the drug was registered.

Suppositories containing this substance can be used in both children and adults. Suppositories are prescribed for pregnant women from the 14th week of pregnancy. The drug has no restrictions on use during lactation. This type of drug is especially convenient for children who may be afraid of intramuscular injections.

In 2019, the drug received the Russian Pharma Awards (which is given upon the doctor survey) in the nomination “The most prescribed antiviral drug for the treatment of acute respiratory viral infections in children from the first days of life.”

The intranasal use of drugs containing interferon alfa-2b contributes to the treatment and ensures the effectiveness of the therapy. It is important to note that intranasal administration does not cause resistance to antiviral action.

Grippferon® contains at least 10,000 IU of the active substance, as well as auxiliary elements: polyvinylpyrrolidone, polyethylene oxide, and trilon B. The drug was patented in 2000 and is one of the most popular nasal sprays in Russia and Belarus.

The mechanism of action is based on the ability of interferon to prevent the replication of viruses that enter the body through the respiratory tract. At the first signs of the disease, Grippferon® is sprayed into the nose in an age-related dosage up to 5 times a day for 5 days. Grippferon® is contraindicated in case of individual intolerance to the components. It is also not recommended to use the drug in severe forms of an allergic reaction and apply it simultaneously with nasal vasoconstrictor drugs since interferon promotes enhanced drying of the nasal mucosa.

The drug is allowed to be used during pregnancy. There are no restrictions on its use during lactation either. 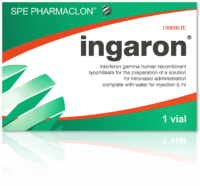 Ingaron® belongs to a gamma class of interferons and is the first and only Russian interferon-gamma medication at this point. Unlike other interferons, interferon-gamma has a combined effect: broad-spectrum antiviral (more than 200 viruses) and immunomodulating activity. Interferon-gamma blocks the penetration and reproduction of viruses and also kills virus-infected cells, which is the second line of defense if a severe infection breaks through the first level of protection.

Soviet scientists began developing Ingaron® back in 1989, but because of the reformation period in the country, the research has only been recently completed. In 2006, the drug Ingaron® received a license for production and sale.

It is important to note that there is no drug addiction to Ingaron®, and side effects are not observed during its use. The convenient form of administration (nasal) and storage makes this antiviral and immunomodulatory agent optimal for use. Before dilution, the solution can be stored at temperatures up to 25°C (77°F). After dilution, it must be stored in the refrigerator for no longer than 10 days.

The potential of the combined use of the two main classes of IFN (alpha and gamma) in the treatment of influenza is demonstrated as well. Clinical studies have shown that the combined use of these types of IFN drugs reduces the severity of the infection process, shortens the duration of the disease, and prevents the development of severe complications.

An alternative method of interferon application is an inhalation with a nebulizer. Inhalations are used to treat respiratory diseases only, while injections can affect any infectious lesions of the body. It is important to note that the instructions do not have indications of the inhalation mode of administration.

The mode of application, dosage, and duration of treatment are determined individually depending on the indications, age, condition of the patient, and their tolerance to the drug. The most commonly used form of IFN is suppositories and spray, because they are OTC and convenient for administration. However, it should be borne in mind that there is no best form of interferon. The use of specific forms should be carried out in accordance with the clinical situation and after consultation with the attending physician. The medicine is classified as a potent drug, so prior to use, it is recommended to read the instructions for use.