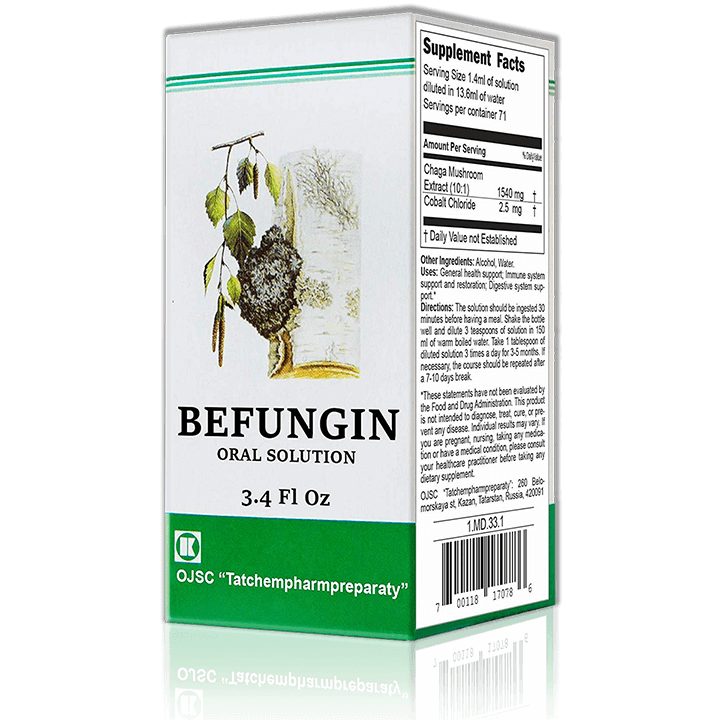 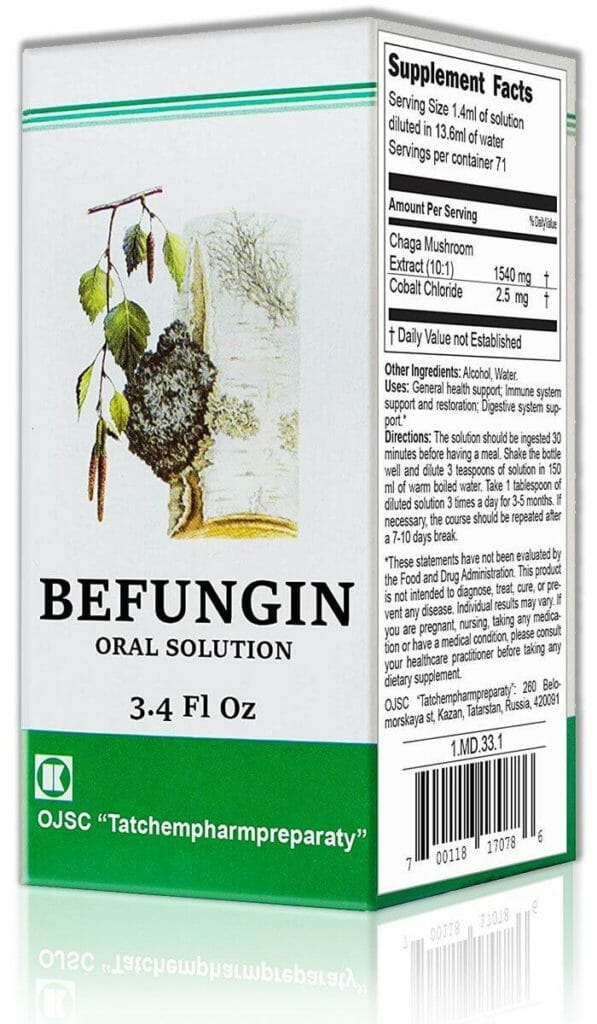 Befungin is a restorative and regenerative medicine based on Chaga mushroom. This supplement stimulates metabolism, restores hematogenesis and strengthens immune system after long-term illnesses.
Befungin contains the extract of a cinder conk (Chaga mushroom which grows on birch trees) and 1.5% cobalt sulphate or 1% cobalt chloride.
The Chaga mushroom is believed to have been discovered and used in China in the 3rd century BC, later being adopted by Japan and then Korea. In the 19th century, it finally came to Russia.

Befungin and other chaga products can be used as a symptomatic treatment in several gastrointestinal diseases (i.e. chronic gastritis with increased gastric acid secretion, stomach ulcer or violation and tone reduction of gastric motility). Befungin is widely used in oncological diseases. The preparation can be used as a prophylactic treatment in several systemic diseases (i.e. systemic lupus erythematosis and psoriasis).

Befungin stimulates metabolism and promotes healing of gastric or duodenal ulcers. It can be used in chronic gastritis and dyskinesia of the gastrointestinal tract with symptoms of atony. Chaga mushroom-based preparations are biogenic stimulants that strengthen immune system, improve the body cellular defence, stimulate the central nervous system and improve metabolism.

Find some interesting facts about Chaga and it benefits and here https://chaga101.com/10-health-benefits-of-drinking-chaga-tea/ and buy BEFUNGIN Chaga tincture from us

Active ingredients Cinder conk extract (Fungi betulini extract) + Cobalt chloride Contents and packaging A liquid obtained from the birch tree Chaga mushroom. 100 g of liquid contain 0.175 g of cobalt chloride or 0.2 g of cobalt sulphate; bottle 100 ml. Pharmacological effect Pharmacological effect of Befungin include analgesic, tonic and stimulating; in particular, it stimulates the gastrointestinal tract. The preparation stabilizes metabolism. Pharmacodynamic properties The mixture’s properties result from its content - biologically active substances such as polysaccharides, humic-like chagic acid, organic acids, trace substances, including manganese and cobalt, hormonal, etc. They are involved in the regulation of tissue metabolism. Befungin suppresses the development of tumour cells, as it influences free radical processes. Indications Gastrointestinal diseases (chronic gastritis, dyskinesia of the gastrointestinal tract with symptoms of atony and gastric ulcer) as well as psoriasis and oncogenesis (improvement of the general condition of the patient). Contradictions Hypersensitivity Side effects Allergic response Application and dosage Per os, 30 minutes before meal. Shake well before opening, dilute 3 teaspoons of the mixture in 150 ml of warm boiled water. Take 1 tablespoon 3 times a day for 3-5 months. If necessary, treatment courses can be repeated with intervals of 7-10 days in-between. Storage conditions Store in a cool dark place (8-15 C) Keep out of the reach of children Shelf life 3 years 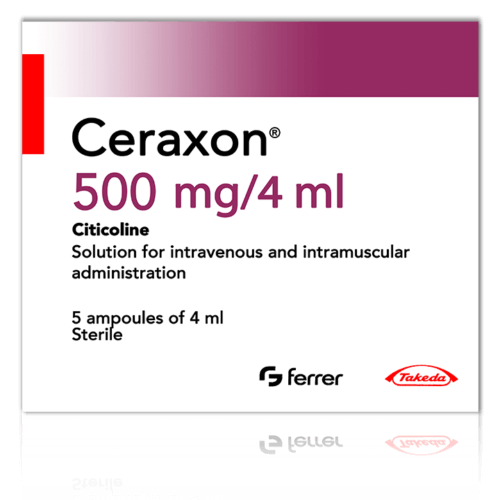 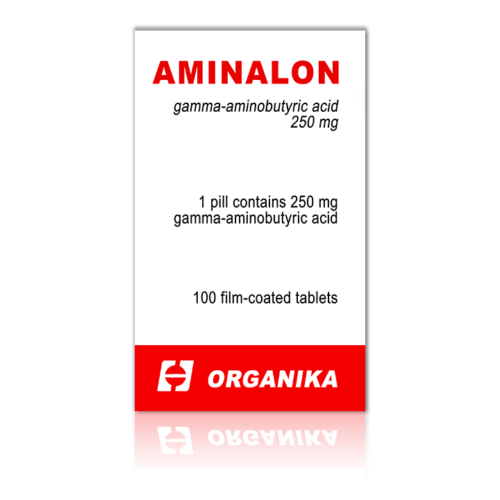 Aminalon is a substance with nootropic and psychostimulatory qualities. Gamma-Aminobutyric acid (GABA) is the only active component in this drug. GABA is synthesised in the brain from glutamic acid and serves to slow down nerve impulses.