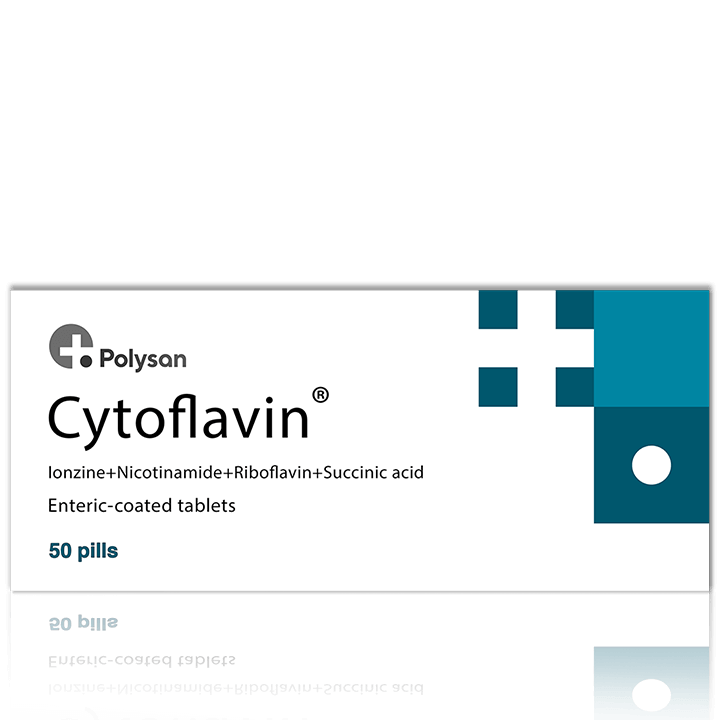 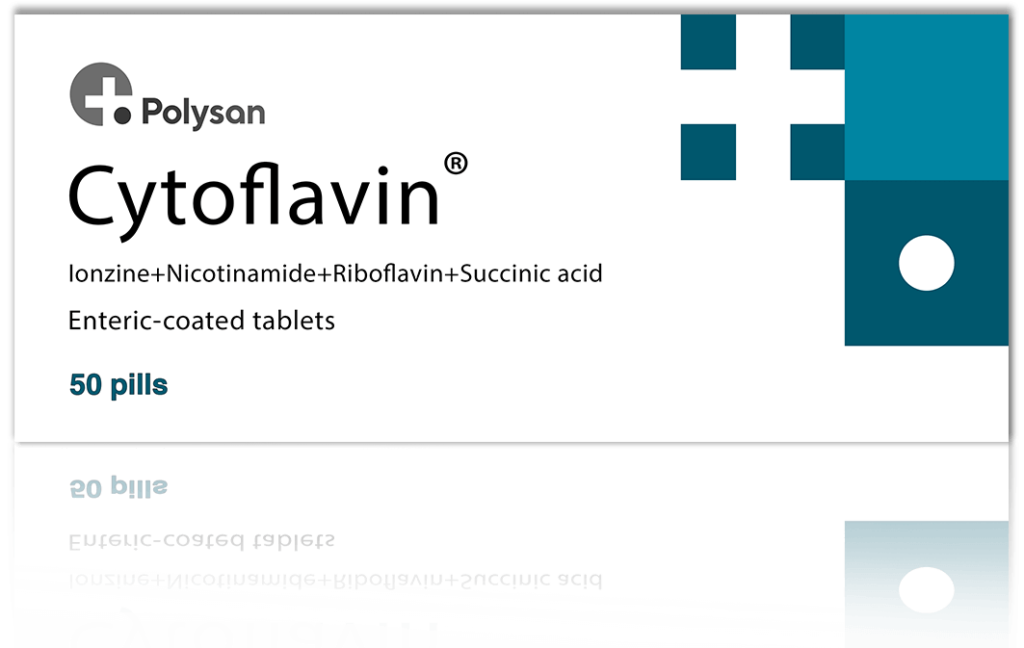 Cytoflavin® is a metabolic drug. Its pharmacological effects are stipulated by the complex effect of the components that make up the drug: succinic acid, inosine, nicotinamide and riboflavin.

Succinic acid. The name derives from Latin succinum, meaning amber. Amber was used for treatment in ancient Egypt and in antiquity. However, in those times the healing properties of minerals were closely interlinked with mystical perceptions. It was only in the 1500s that the succinic acid was discovered as a separate functional substance. Georgius Agricola the German researcher managed to isolate from amber a substance called flos succinic, i.e. “amber flower” (subsequently “succinic acid”). Succinic acid is used in medication as an active substance, improving tissue metabolism and energy supply and reducing tissue hypoxia.

Ionzine is a metabolic agent, a precursor of ATP; it has antihypoxic, metabolic and antiarrhythmic effects. It increases the energy balance of the myocardium, improves the coronary circulation, prevents sequela of intraoperative renal ischemia.

Nicotinamide belongs to a rare group of vitamins. It was first surfaced in 1867. However, only at the beginning of the 20th century its significance for the organism was established. Nicotinamide treats vitamin deficiencies, has an anti-pellagric effect and participates in redox biochemical processes in cells. It does not cause unpleasant skin side effects.

Riboflavin. The discovery of the vitamin occurred in the early XX century. After the discovery of the complex of vitamins of group B, scientists noticed that some vitamins of this group were rapidly destroyed under high temperatures, while others completely retained their properties and continued to work actively in the body. Thanks to this, scientists separated vitamin B2 (riboflavin), which turned to be able to withstand high temperatures, while maintaining its molecular structure. It is used to prevent and treat vitamin B2 deficiency, to treat skin diseases, sluggish wounds, eye diseases, gastrointestinal tract dysfunction, diabetes, anemia, and cirrhosis.

The high content of useful active ingredients makes Cytoflavin® an effective drug in the treatment of the following diseases:

Cytoflavin® is an effective, highly bioavailable drug that has helped many patients. Though the description warns of contraindications and side effects. Dosage and Administration Per os, 2 tab. 2 times / day, 30 minutes before meals, without chewing with an interval of 8-10 hours (drink 100 ml of water). The duration of the course is 25 days (100 tablets). An evening intake of the drug should not be later than at 6pm. The course cannot be repeated earlier than 25-30 days after the end of the previous course. Contraindications Cytoflavin® is used with caution in case of gout, nephrolithiasis and hyperuricemia. The manufacturer's instruction highlights a number of direct contraindications: Side Effects In case of prolonged use in high doses: transient hypoglycemia, hyperuricemia and exacerbation of gout (possible). Central nervous system: transient headache (possible); Allergic reactions: itching (possible). Note: When Cytoflavin® is taken orally, dose adjustment of antihypertensive drugs in patients with arterial hypertension may be required. The drug therapy is performed with caution in case of diabetes. During the treatment, plasma glucose should be monitored. When using the drug, urine staining in yellow is possible. 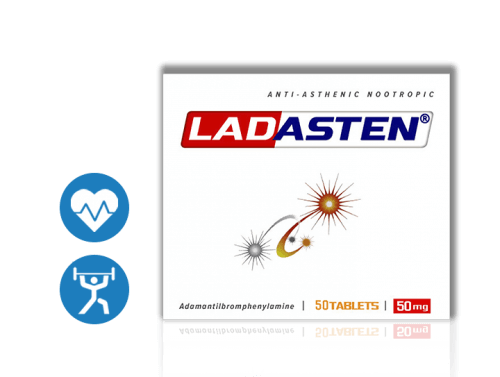 LADASTEN В® is very different from typical psycostimulants in that it does not work on any particular receptor in the brain but acts on the expression of 1116 genes, all of which affect the central nervous system. Bromantane indirectly stimulates the expression of dopamine, unlike typical stimulants, which simply release dopamine already stored in the synaptic cleft. As a result, Ladasten has a weaker stimulating effect and does not cause dopamine depletion.