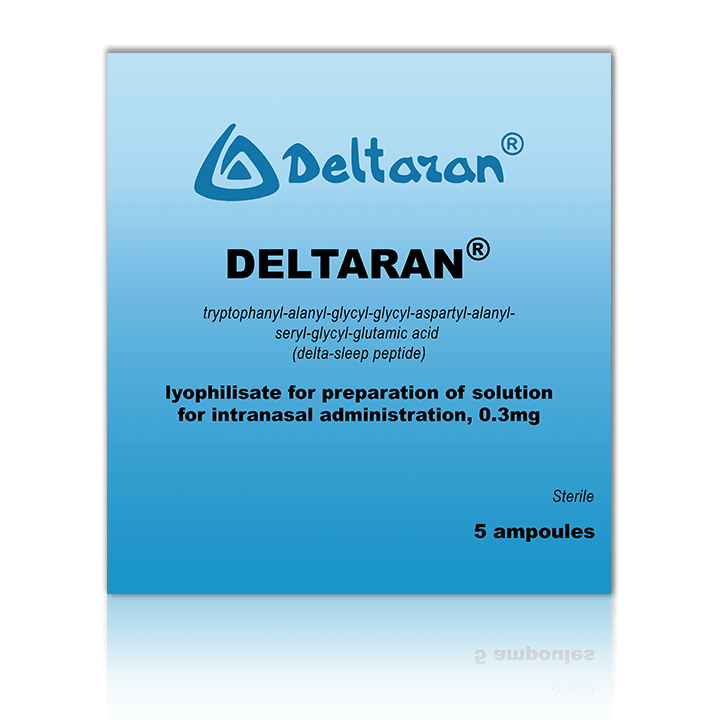 Deltaran is a representative of the class of neuroprotectors. It has a powerful antioxidant, stress-protective, and antidepressant effect. It protects neurons from the destruction by toxic, infectious, and other damaging agents, and also prevents the death of nerve cells because of stress.

Deltaran (DSIP) is based on a synthetic nonapeptide – an analog of one of the most important natural endogenous peptides – discovered in 1977 by Swiss scientists Monnier M. and Schoenenberg G.A. – the regulatory delta-sleep peptide (DSIP: delta-sleep-inducing peptide) with a stabilizing effect on the cell homeostasis. DSIP in free and bound form is present in peripheral organs, tissues and body fluids, hypophysis, hypothalamus, and in the limbic system of the brain. One of the most impressive features of its wide multifunctional action is its pronounced stress-protective and adaptogenic activity.

The peptide-based Deltaran drug was originally developed as an anti-alcohol medication. The development was carried out in the Shemyakin-Ovchinnikov Institute of Bioorganic Chemistry together with the Pharmacology Institute of the Russian Academy of Medical Sciences in the 1980s. After conducting experimental and clinical studies, the drug Deltaran was registered by the Ministry of Health of the Russian Federation in July 1998.

The main mechanism of action of the drug is the compensation for the deficiency of DSIP, which protects neurons from the destruction, resulting from psycho-emotional or systemic stress, toxic effects, or aging. Protecting the central nervous system from damaging effects. Buy Delta-sleep-inducing peptide to radically change the course of a large number of diseases in a favorable direction, to increase the effectiveness of standard medicines, and to prevent the development of complications. In clinical trials and testing, DSIP has shown a number of positive effects:

The use of Deltaran makes it possible to compensate for the deficiency of endogenous neuroprotectors in the body, which ensures unimpaired functioning of the central nervous system in extreme situations.

The content of 1 ampoule of Deltaran is dissolved in 0.5 ml of boiled water of room temperature (10–12 drops or half a pipette) immediately before use and is pipetted into both nasal passages with an interval of 15–20 minutes. After an intranasal administration, the drug reaches the thalamic nuclei in 1.5–2 minutes. The stabilizing effect develops, depending on the level of endogenous peptides, within from 3 minutes to 1.5 hours.

The resulting solution is utilized in full and cannot be stored. The pipette is washed thoroughly with boiled water after use.

1–3 ampoules per day are used for 5–10 days for the prevention and treatment of a disease.

For detailed information on the drug administration please refer to the description.

The drug does not have a sedative action.

Adequate foreign analogs do not exist. Ciba-Gelgy Acea 1024 drug has a narrower spectrum of action, is not a direct derivative of DSIP, and contains substances that are alien to the human body, thus it has a number of side effects, including allergenic reactions. Hoffman La Roshe (AG Clinalfa) DSIP Clinalfa drug has a narrower scope (narcology and sleep disorders), its method of use (intravenous) is less convenient, in addition, it is several times more expensive than Deltaran.