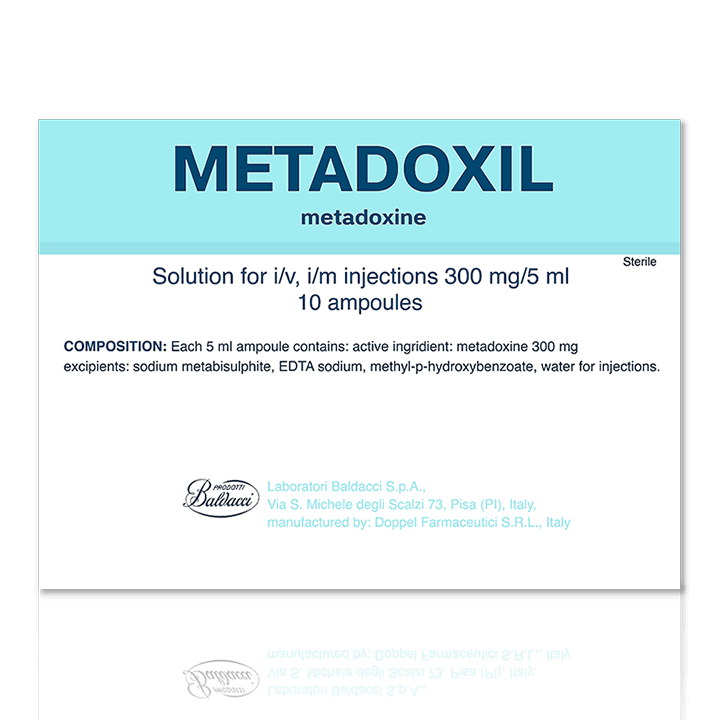 Every year, the number of people who enter medical institutions suffering from acquired liver diseases resulting from the negative effects of alcohol consumption increases. When alcohol enters the bloodstream, protective processes are launched in the body for its detoxification and rapid elimination. With moderate consumption of ethanol, enzymes can independently cope with the poison. However, in the case of frequent use of the product, alcohol dependence develops, the liver loses its ability to completely metabolize ethanol, and toxins accumulate in the body. Therapy of alcoholism involves the use of hepatoprotective and detoxification drugs, such as Metadoxil.

Metadoxil is a medicine designed to restore and maintain a healthy liver. The drug helps to prevent many diseases and negative consequences associated with the regular intake of alcoholic beverages. Initially, this Italian drug was created as a means to treat teenage alcoholism, but then it became widely used for the treatment of adults. The active substance of the drug is metadoxine which is a more active derivative of pyridoxine (vitamin B6). The drug helps detoxify the body by speeding up the process of elimination of alcohol and its decay products from the body. In prolonged use, the drug helps protect the liver, as it increases the resistance of liver cells to toxic substances.

Metadoxil or Metadoxine (as it is called in international practice) may protect liver cells from destruction, and act as a hepatoprotector. Alcohol is able to dissolve the fatty membrane of hepatocytes (liver cells), destroying them. Metadoxil enters into biochemical reactions with fatty acids, neutralizing the action of alcohol. As a result, the resistance of liver cells to the action of toxic substances (ethanol and acetaldehyde – the toxic product of its decay) is significantly increased; the compound may accelerate the detoxification process of the body, enhancing the production of enzymes that decompose toxins. Therefore, alcohol and acetaldehyde are excreted faster. It may also reduce the craving for alcohol and slow down the development of cirrhosis, as it accelerates the elimination of substances that contribute to the growth of fibrous tissue because of the death of hepatocytes. Besides, it may accelerate the process of getting out of a hangover.

Due to rapid detoxification, Metadoxil weakens the effect of ethanol on the brain and central nervous system. Due to this property, the mental and physical manifestations of withdrawal symptoms are relieved and the symptoms of a hangover (headache, nausea, vomiting, dizziness, bone pain) are eliminated. Appetite, sleep, and mood are being improved. The feeling of anxiety and fear goes away. Buy Metadoxil to improve memory and ability to think impaired after alcohol consumption. It may reduce nervous system agitation and eliminate hand tremors thus acting as an antidepressant.

Check other products from the Quit Addiction category!

Dosage, duration of treatment, and feasibility of using the drug are determined based on the age, and physiological and individual characteristics of the patient. The drug is available in the form of tablets and injections. Please refer to the official description for detailed information on drug administration.

According to reviews of patients suffering from alcohol dependence, the drug is well-tolerated, no cases of overdose have been observed. Sometimes allergic reactions may appear.

Patients with Parkinson’s disease and bronchial asthma should be cautious when taking the drug. In the case of intramuscular or intravenous injection, bronchospasm may develop.

The use of the medication is contraindicated in the following cases:

Metadoxil is not an independent tool to eliminate alcohol dependence. Its main task is to normalize the liver functions and alleviate its diseases. Metadoxil helps cleanse the body of toxins and elements of ethanol decomposition. An integrated approach is needed for a complete recovery, including psychotherapy, vitamin therapy, and other medical procedures (conditional methods, sensitizing therapy, and hypnosis). The drug can be taken both during the anti-alcohol course, and beyond it – to eliminate liver disorders.