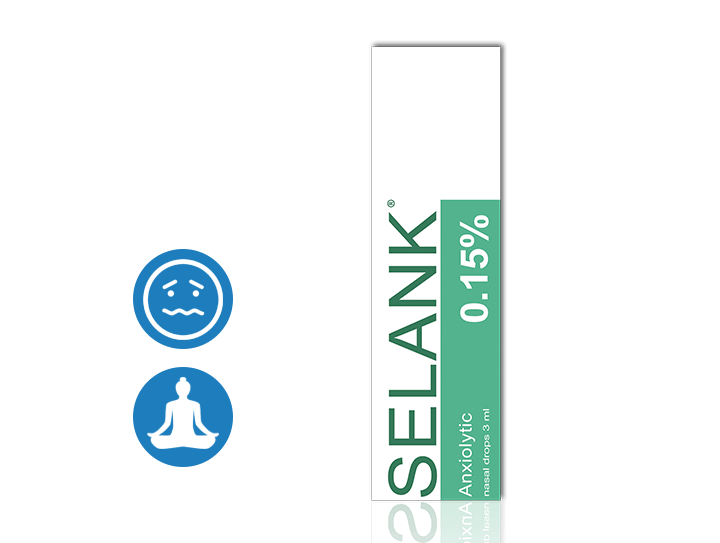 Selank is a synthesized analog of the endogenous peptide Taftcin. The drug has an original mechanism of neuro-specific action on the central nervous system. Selank has antianxiety, antidepressant and antiasthenic effects. It removes symptoms of anxiety, fear, apathy, depression and asthenia. Selank has a positive effect on cognitive functions; it improves memory, speech, increases attention and activates learning processes, in particular, remembering, analyzing and reproducing information. The drug normalizes psychomotor reactions. Selank removes the emotional strain, stress and stimulates adaptive behaviour, aimed at achieving set targets.

Selank is administered intranasally (nasal drops). Absolute bioavailability of the drug is 92.8%. The drug is quickly absorbed from the nasal mucosa and after 30 seconds is detected in the blood plasma; then the substance is quickly distributed to organs and tissues (including brain tissue).

Concentration of the drug in the blood plasma progressively decreases within 5-5.5 minutes. Neither unchanged drug nor its metabolites can be found in the urine due to the fast degradation of Selank under the influence of tissue peptidases.

Selank® is administered intranasally using a vial with a plastic cap.

At the first use remove the plastic screw cap and replace it with an enclosed pipette with a cap. Draw up the drug into the pipette. Squeeze out the required number of drops of the drug on a clean mucous membrane of the nasal passage. The drug is instilled into the nasal passages in a sitting position with the head slightly thrown back or tilted to one side, after that each nostril is held with a finger for a short time.
The absorption effectiveness may decrease in case of increased rheum that is why it is recommended to clean the nasal passage before the drug instillation.
Dosage: 2 drops in each nasal passage 3 times a day. The duration of the course of treatment is 14 days. If necessary, the course of treatment can be repeated after 1-3 weeks. Use the drug only according to the method of application and at the doses indicated in the instructions. If necessary, please consult your doctor before using the medicine.

Increasingly sensitive perception of the odor and taste can cause unpleasant gustatory sensation if the solution gets into the pharyngeal mucous membrane from the nasal cavity. Individual intolerance can cause allergic reactions.

If any of the side effects mentioned above aggravate or if you notice any other side effects, inform your doctor.

No cases of overdose have been recorded.

Selank has no influence on the effects of drugs that depress or stimulate the central nervous system, including haloperidol, pentobarbital, hexobarbital and analeptics. The drug can be combined with any psycho- and neuroactive therapy. Selank is safe when used together with ethanol-containing products.
If you are taking other medications (including over-the-counter ones), consult your doctor before using Selank.

Selank does not cause drug dependence and addiction.

The safety of the drug administration during pregnancy was not established. Therefore, it is not recommended to use Selank during pregnancy.
If you need to use the drug during lactation, breastfeeding should be discontinued.

Influence on the ability to drive vehicles and operate machines:

Selank does not affect the ability to drive vehicles and operate mechanisms.

Store at temperatures not exceeding 10°C, do not freeze, protect from light. An opened dropper bottle should be stored no longer than 30 days at temperatures below 25°C. Keep in a safe place out of the reach of children.

Shelf life: 2 years. Do not use beyond the expiration date printed on the package.