SkQ1 Products: What Are They and How They Work

The substance SkQ1 was invented by Vladimir Skulachev (Russian biochemist, Doctor of Biological Sciences, and one of the most quoted biochemists in the world), while he was studying the processes of human aging. Just like researchers from the middle ages, he dreamed about finding the tool which can help to slow down this process. But he armed himself with science. So, Skulachev had been working in terms of the assumption, that aging is mostly caused by a slow self-poisoning of the human body. This means, that the aging process can be slowed down by the neutralization of free radicals, which damage the cells of the human body and make them start the self-destruction program. Just neutralize free radicals! But how? This is what a long-way investigation of Skulachev and his research group was about. They developed Skulachev’s Quinone (SkQ1), a mitochondrial antioxidant based on plastoquinone, a substance extracted from chloroplast, which is the most oxygenated material.

As it is said above, the main task of the substance is to neutralize free radicals. Best of all, before they damage cells a lot. So SkQ1 was developed to be delivered exactly to the target as fast as it’s possible. That’s why SkQ1 is:

The mechanism of action includes the following:

In practice, SkQ1 turned out to be exactly the substance capturing and neutralizing free radicals at the site of their formation. This explains the high-level efficacy of SkQ1.

The first powerful anti-aging medicine, Plastomitin, is going to be out soon, says Maxim Skulachev, CEO of the company Mitotech, leading researcher of the Bioengineering and Bioinformatics Department, MSU. Plastomitin has been already tested on mice, and the experiments showed the slow-down of the aging process compared to mice that did not receive the drug. Almost the same thing was done by researchers from Stockholm University. As a result, life expectancy had been increased, both the average and the maximum. Moreover, SkQ1 safety for the human body was confirmed in the first phase of clinical trials in healthy volunteers: 36 people took part in the study group. The research group of the company is going to test the preparation for patients with some age-related diseases in the USA and Canada. Then, it will be found out whether SkQ1-based drugs slow down the aging of the human body. 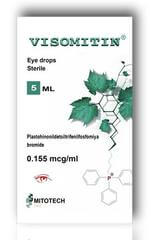 Speaking of Visomitin, the eye drops based on SkQ1 as well, the 3rd phase of clinical trials was recently finished in the USA. In these trials, another option of eye drops had been tested, where the concentration of SkQ1 was multiplied. The trials were funded by the Hong Kong company Essex Bio-Technology.

The interesting fact is that as soon as Visotimin eye drops appeared on the market, people began to use them as an anti-wrinkle skin treatment, which is not even suitable for the skin! That’s why the company developed some skincare products based on SkQ1: anti-aging serum, and a regenerating gel.

What we have in CosmicNootropic store

Let’s see what we have here, in CosmicNootropic store. That’s right: everything! Maybe, this is the best moment to try? Check these out: