oval tablets with a film coating of light brown color with a grayish tint and a separating break line. The color of the transection is almost white. 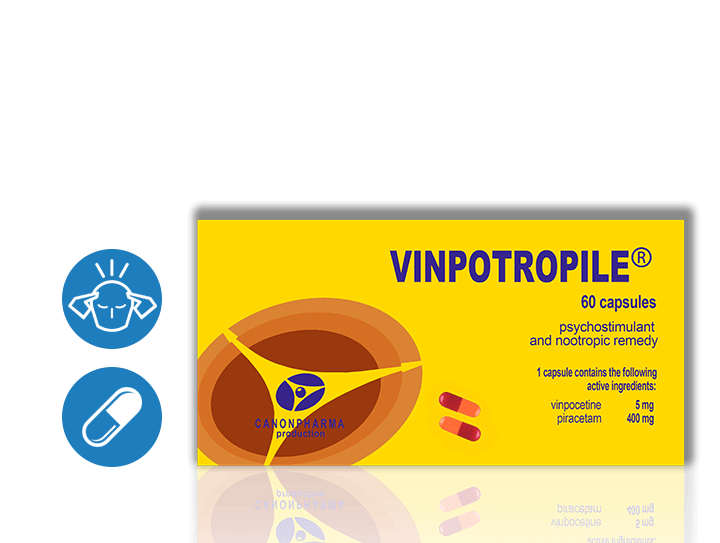 Vinpotropile is a combination drug. It has properties of a medication improving the cerebral blood flow (Vinpocetine) and of a nootropic medication (Piracetam).

As a medication for improving the cerebral blood flow, it improves the metabolism of the brain increasing the glucose and oxygen consumption by the brain tissue. It increases the resistance of neurons to hypoxia; enhances the glucose transport to the brain, through the blood-brain barrier; makes the process of the glucose breakdown more energy efficient and aerobic; selectively blocks Ca2+-dependent phosphodiesterase; increases the levels of adenosine monophosphate (AMP), of cyclic guanosine monophosphate (cGMP) and adenosine triphosphate (ATP) of the brain. Increases the exchange of norepinephrine and serotonin of the brain; stimulates the ascending branch of the noradrenergic system, has an antioxidant effect. Reduces the platelet aggregation and increased blood viscosity; increases the elasticity of erythrocytes and blocks the utilization of adenosine by erythrocytes; helps to increase the return of oxygen by erythrocytes. Increases the cerebral blood flow; reduces the resistance of cerebral vessels without a significant change in indicators of the systemic blood circulation. Does not have the “steal” effect and enhances the blood supply, especially in ischemic areas of the brain. Penetrates through the placental barrier.
As a nootropic medication, it has a positive effect on the brain metabolic processes. It slightly increases the ATP concentration in the brain, enhances the synthesis of ribonucleic acid and phospholipids, stimulates glycolytic processes, enhances the utilization of glucose; improves the integrative activity of the brain, enhances memory consolidation, facilitates the learning process; changes the speed of the brain excitation spreading, improves microcirculation without having a vasodilatory action, inhibits the aggregation of activated platelets; has a protective effect in case of brain injury caused by hypoxia, intoxications, electric shock; strengthens alpha- and beta-activity, reduces delta-activity on the electroencephalogram, reduces the severity of the vestibular nystagmus; improves the connections between the cerebral hemispheres and synaptic conductivity in neocortical structures, increases mental activity, enhances cerebral blood flow; does not have sedative, psycho-stimulating effect. The effect develops gradually.

Vinpotropile has a pronounced effect on symptoms of initial manifestations of cognitive disorders of cerebrovascular origin in elderly and senile patients. It is recommended in psychogeriatric practice.

Metabolism: It does not metabolize when it penetrates through the intestinal wall. The maximum concentration in tissues is reached 2-4 hours after the intake. Protein binding – 66%, bioavailability at the intake – 7%. The clearance of 66.7 l/h exceeds the plasma volume of the liver (50 l/h), which indicates extrahepatic metabolism. The main metabolite is apovincamine acid, which has some pharmacological activity. Other inactive metabolites are hydroxyvinpocetine, hydroxyapovinkaminic acid, hydroxyvinpocetin glycinate. At reingestion the kinetics is linear.

Distribution: The distribution volume is about 0.6 l/kg. It penetrates through the blood-brain and placental barriers, accumulates selectively in the tissues of the cerebral cortex.

Excretion: Almost does not undergo biotransformation and is excreted in the unchanged form by the kidneys through the glomerular filtration. The total clearance is 80-90 ml/min. The half-life from the blood plasma – 4-5 hours, from the cerebrospinal fluid – 8.5 hours.

Cerebrovascular insufficiency (the recovery period after an ischemic and hemorrhagic stroke), Parkinsonism of the vascular genesis, intoxications, psycho-organic syndrome with prevailing symptoms of asthenia and adynamia, symptomatic treatment of dizziness, prevention of migraine and kinetosis.

Encephalopathy of various genesis, including alcoholism; brain trauma and other diseases of the central nervous system accompanied by the decrease of intellectual and mnestic functions; asthenic syndrome; labyrinthopathy, Meniere’s syndrome.

Ingest without regard to timing of food. For patients over 18 years old: 1 tablet 2-3 times a day with water. The last intake should be no later than 4 hours before sleep. The duration of treatment is from 2-3 weeks to 2-6 months. Before cancellation, the dose should be gradually reduced (transfer to taking Vinpotropile in the form of capsules with 5 mg of vinpocetine and 400 mg of piracetam is possible).

Dosage and duration of the treatment are determined by the doctor.

Reduces the effect of anticonvulsants (reduces the convulsive threshold). Despite the lack of data confirming the possibility of interaction, it is recommended to exercise caution when co-prescribing drugs with central and antiarrhythmic mode of action.

In case of lactose intolerance, it should be taken into account that one capsule contains about 225 mg of lactose.

Storage conditions: store in a dry, dark place at a temperature no higher than 25°C. Keep out of reach of children.

Shelf life: 2 years. Do not use beyond the expiration date.