Nowadays the problem of treating influenza and other viral diseases is extremely urgent because they make up an impressive share of all infectious diseases. Every year in the winter months, influenza spreads over several continents. According to the World Health Organization (WHO), 5–10% of adults and 20–30% of children suffer from influenza every year, while terminal episodes amount to around 250–500 thousand people. Fortunately, the human body is equipped with the immune system, a means of protection against foreign microorganisms. The difficulty lies in the fact that it takes the system several days to develop “weapons”, interferons and antibodies, in quantities sufficient to struggle with the disease. The pharmaceutical industry is attempting to help the immune system accelerate recovery, reduce the effects of infection, and prevent morbidity. The Soviet Union began the development of a broad-spectrum antiviral drug capable of suppressing influenza and other acute respiratory viral infections (ARVI) in the middle of the last century. In 1974 scientists of the All-Union Scientific Research Chemical-Pharmaceutical Institute, Institute of Medical Radiology of the USSR Academy of Medical Sciences, and the Leningrad Bacteriological and Diagnostic Institute developed an antiviral drug ARBIDOL. 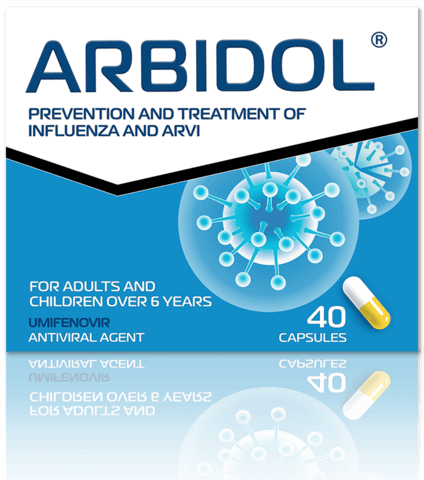 ARBIDOL is one of the most popular Russian antiviral medications and it is included in the Russian list of vital and most important drugs. ARBIDOL is a broad-spectrum antiviral compound used in the treatment of influenza caused by A and B infections (including swine and avian) and other ARVI and rotavirus pathogens. The drug had been developed for more than a decade. During this period, in the course of many experiments, information had been obtained about its high safety and efficacy. This makes it possible to prescribe the medicine not only for adults but also for children.

The active ingredient of the drug is Umifenovir. This substance exhibits antiviral and immunomodulating properties. In simpler words the mechanism of action of the substance can be described like this:

Thus, ARBIDOL acts as an inhibitor of the fusion of the virus with the cells of the mucous membranes of the upper respiratory tract. Accordingly, the most effective period for taking the drug is in the first hours of the disease, when the virus has not yet had time to invade the cell. The possibility of using the drug ARBIDOL in ARVI of various etiologies is due to its universal mechanism of action as described above (virus fusion). Due to this mechanism of action, ARBIDOL has a wide spectrum of antiviral activity against viruses that cause various acute respiratory infections, including viruses from the Coronaviridae family, as stated on the main page of the official website of the drug (https://arbidol.ru/).

At the end of 2013, the active substance of the drug ARBIDOL (Umifenovir) was included in the group of direct-acting antivirals (J05A) of the Anatomical-therapeutic-chemical classification (ATC) – the international drug classifier. Umifenovir was assigned a separate code in the international classification of drugs – J05AX13. Thus its existence and its use in medical practice have been recognized.

Despite the fact that ARBIDOL is not an FDA certified drug, it is considered one of the most popular antiviral agents in Russia, and it is also actively used in some CIS countries. In Kazakhstan, it is produced under the brand name Afludol, in Belarus, the drug is known as Arpetol and Arpeflu, and the Kyiv pharmaceutical company ‘Darnitsa’ produces it under the brand name Immustat. Umifenovir is also available in the Netherlands under the name Orvitol NP. Umifenovir is actively used in China as well.

In the past few months, this drug has gained particular relevance in the light of the outbreak of pneumonia that began in December 2019 in the Chinese city of Wuhan. The contagious agent is the previously unknown coronavirus 2019-nCoV. Cases of infection and death have been increasing over the past few months. The virus is transmitted from person to person. The risk of infection is very high. Cases of infection are recorded in Thailand, Australia, Singapore, Japan, the USA, Germany, France, etc. So far, the effectiveness of any drugs against coronavirus 2019-nCoV has not been reported.

However, the National Health Commission of the People’s Republic of China published the sixth version of the preliminary plan for the diagnosis and treatment of the disease, which included the drug with the active substance Umifenovir (ARBIDOL). The drug was included in a large-scale program for testing possible medications that can alleviate the course of the disease. Chinese experts recommend taking 200 mg (2 capsules) for adults, daily 3 times/day (check here). It is not recommended to use 3 or more antiviral drugs at the same time. The drug administration should be discontinued if any side effects occur.

According to Li Lanjuan, a virologist and an adviser to the National Health Commission of China, Umifenovir demonstrates the capability to inhibit the pathological effect of coronavirus 2019-nCoV on cells in vitro. The Chinese manufacturer SSY Group Limited assures that the drug can stimulate the production of interferon by the body of the patient suffering from coronavirus. At the same time, Pubmed.gov, which is one of the most authoritative sources of medical publications in the world, has a significant number of double-blind, randomized, placebo-controlled tests of Umifenovir, showing its effectiveness against influenza and ARVI, for instance: https://www.ncbi.nlm.nih.gov/pubmed/31094461.

However, the effectiveness of ARBIDOL® in the treatment of coronavirus is yet to be proven. This will take some time because the term “proven effectiveness” means that the medication has been used to treat a wide range of patients in many different medical institutions; and over a long period of time, the consequences of such use have been observed. In addition to ARBIDOL, the program includes about 30 other drugs, among them Chloroquine Phosphate, and a combination of Ribavirin and Interferon, as well as some non-drug methods of Chinese alternative medicine.

It is obvious that in the fight against the novel virus we need to act fast. In these terms, many experts point out that Umifenovir indeed may be able to reduce the severity of the disease. According to the WHO Guidelines for Solving the Ethical Problems in Infectious Diseases, if during an epidemic there are no drugs with proven effectiveness, it is permissible to include potentially effective drugs in national recommendations. In this regard, in order to save the lives of patients who are diagnosed with coronavirus, doctors may prescribe all drugs that have at least a potential chance to affect the virus – including Umifenovir (ARBIDOL). Here is one of the latest Chinese studies on ARBIDOL in terms of coronavirus: https://www.ncbi.nlm.nih.gov/pubmed/32037389.

In the context of the spreading virus, it is important to remember about prevention as much as about the treatment itself. Doctors recommend the following preventive measures to reduce the risk of infection:

There are contraindications to the drug administration, please consult the specialist prior to use.