Interferons are a group of proteins that are produced in the human body. In simple terms, they help the body fight the agents of various diseases, primarily viral ones. Interferons have minimal side effects (in comparison with other modulators), relatively small concentrations and they are often prescribed for the treatment of colds, flu, and SARS for the different age groups of patients (children, adults, and the elderly). 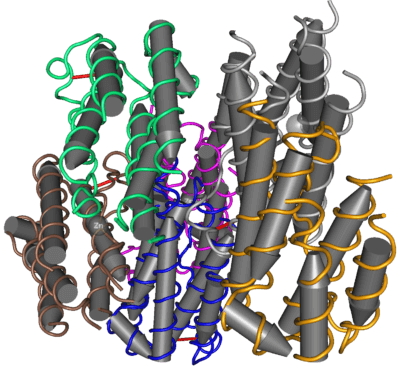 Long before the discovery of interferon, virologists faced an obscure phenomenon of interference (mutual suppression) of viruses. If animals were infected with a virus of one type, they became immune to viruses of another type. In 1957, when studying interference, the scientists Alick Isaacs and Jean Lindenmann discovered the factor responsible for this phenomenon and called it “interferon” (IFN). The discovery of IFN has become one of the greatest discoveries in virology. Over the past 50 years, numerous properties of this protein have been studied. At present, IFNs are classified as cytokines (mediators of immunity) and are represented by a family of proteins with antiviral, immunomodulating, antitumor, and other types of activity.

Initially, IFN preparations were only obtained from donor blood cells; they were called leukocyte interferons. To do this, blood cells were treated with viruses, so that they would start producing proteins with protective properties. This kind of interferon was highly effective, but its large-scale production was difficult because of the shortage of raw materials. For example, to obtain the volume of the drug needed to treat one cancer patient, it was necessary to collect blood from 200 donors!

A breakthrough in the study and use of this agent occurred in the 1980s. Manufacturers learned how to produce recombinant interferon by genetic engineering using escherichia coli, into which the interferon gene was introduced. The production of recombinant preparations produced synthetically has become much cheaper and, most importantly, safer, because obtaining similar drugs from human blood or other biological raw materials could become a source of infection. The first drug based on interferon, created in the USSR, was called Reaferon®.

Interferon drugs were extremely popular: interferon and its inducers were recommended during flu epidemics as an excellent preventive and therapeutic agents that helped strengthen the immunity. And practice confirmed this.

Interferons are divided into four kinds: alpha, beta, gamma, and lambda, which are produced by different cells. They are put into three types according to table below:

However, in medicine only the first three kinds are actively used so far:

IFN of type I is an important component of the complex treatment of influenza. In addition to influenza, they are also used for emergency prevention of other ARVI (rhino-, corona-, and adenovirus infections), as well as for protecting at-risk groups (children, the elderly, health workers, etc.).

The natural and recombinant IFN-α is the most widely studied form of interferon since it has been in clinical practice for more than 30 years. IFN-β is used for narrower indications (multiple sclerosis, melanomas, gliomas, juvenile papillomatosis, etc.). In recent years, type II IFN (gamma), which is one of the most important factors in the regulation and control of cellular immunity, has received much attention.

It would not be correct to say that one of the forms is better than the other. When choosing particular interferon containing drug, it is important to make the decision based on the person’s condition and the presence of indications for use.

WHY DOES A PERSON NEED INTERFERON?

When pathogenic viruses enter the body, they begin to actively reproduce. The cellular structure affected by these viruses proceeds to the synthesis of interferons, which begin to act inside the cell, and then exit it and transmit information to neighboring cells. Under their influence neighboring cells suspend the process of protein synthesis. Thus the cell infected by the virus and the surrounding cells freeze. This phenomenon is called apoptosis. Cells cease to function and so does the virus as it needs a living human cell to operate. If the cell does not function, the virus loses its ability to replicate and its action is thus inhibited. Interferon does not destroy viruses, but it retains the movement and active reproduction of viral particles. At the next stage, the virus is affected by our immune system as a second barrier to disease.

Another action of interferon is the activation of T-cytotoxic cells. This is a type of T-lymphocytes that has a direct effect and can destroy cells affected by the virus and the viruses themselves. 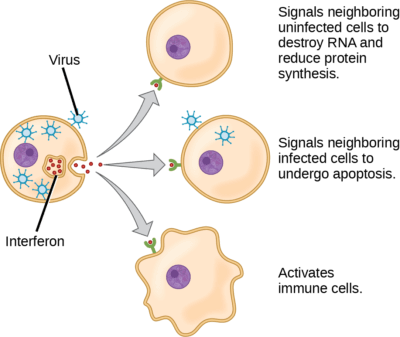 However, the described effects of IFN are not always sufficient to stop the infection process. This process may be affected by the high multiplicity of infection, reduced body resistance, defective IFN systems and immunity, adverse environmental conditions, stress conditions, etc. As a result, an acute or chronic infectious disease may develop and cause a cascade of immune responses. In part, this can be compensated using immunomodulators, such as IFN.

As a rule, these drugs contain human recombinant interferon (synthesized from biological tissues) which is not produced from donated blood. More often it is interferon-alpha, less often beta and still less often gamma.

Read more about them in our upcoming posts!