Remember Phenotropil? This is just the brand name of an active substance Phenylpiracetam, which is a phenyl analog of piracetam. Phenylpiracetam was created at the Russian Academy of Sciences Institute of Biomedical Problems as a psychostimulant of a new generation capable of increasing the mental and physical performance of astronauts at various stages of space flights of various duration without affecting the accuracy of the operator’s activity, as well as making the right decisions in extreme conditions. The state needed a pharmaceutical that is capable of unleashing the body energy without draining it. 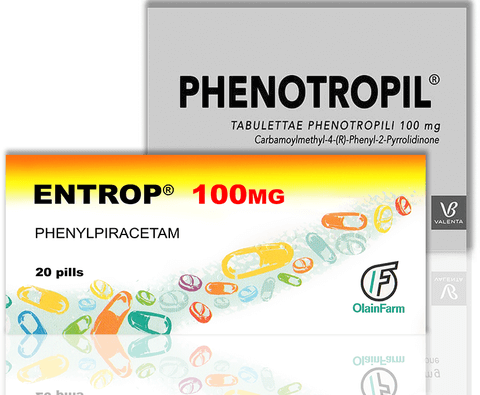 The central neurotropic effects of phenylpiracetam were studied and compared with the effects of piracetam and the other analogs. Phenylpiracetam was found to activate the operant behavior more powerfully, to remove psychodepressant effects of diazepam, to inhibit post-rotational nystagmus, and to prevent the development of retrograde amnesia. Unlike piracetam, phenylpiracetam exhibits a specific anticonvulsant action. After ingestion, it is rapidly absorbed from the gastrointestinal tract, distributed to various organs and tissues, and easily penetrates the blood-brain barrier. The absolute bioavailability of the drug when administered is 100%. Thus, the state got the first totally safe substitute with such strong effects. This drug was also tested a countless number of times on animals and was used on more than 500 patients across the country before becoming available to the general population.

Entrop is the Latvian version of the same and well known Phenylpiracetam. It is also factory produced brand name nootropic that meets the highest safety standards. It has a direct activating effect on the integrative activity of the brain, promotes memory consolidation, improves concentration and mental activity, facilitates the learning process, increases the resistance of brain tissue to hypoxia and toxic effects, exhibits anticonvulsant and anxiolytic activity, regulates the processes of activation and inhibition of the CNS, improves mood. Entrop is produced by OlainFarm, one of the largest pharmaceutical companies in the Baltic countries. It was founded in 1972 with the main goal of providing pharmaceutical raw materials to all the factories of the Soviet Union engaged in the production of finished dosage forms. Nowadays, Olainfarm has been supplying anti-tuberculosis drugs to the World Health Organization. The company is also the founder of the award in the field of chemistry. In our store, we have also Phenibut, Noophen, and Adaptol produced by Olainfarm.

An important thing to note is that you can order this product only in the CosmicNootropic store and nowhere else! For more information, check the product page.